Toddler Temper Tantrums..WHAT DO YOU DO?!

Y’all, Squally is the sweetest child ever….when she wants to be, but here we are getting super close to 17 months and this girl can throw a tantrum like a professional! We like to jokingly say that she deserves an Oscar or an Emmy or something for her performances because the child will fall out and throw herself down and start smiling 0.5 secs later and giggling like nothing was ever wrong.

Now, I know that handling temper tantrums is ALWAYS a hot topic with moms and it varies GREATLY from family to family. As a child, we got whoopings and popped if we acted out and while I would like to avoid doing that with Squally Muffin, sometimes (most times) she does not respond to reason and I am very tempted!

Corporal punishment is not the answer

I remember reading in textbook I had for one of my child and family studies classes basically that hitting a child was a sign of losing your temper and not wanting to take the time to try to rationalize with the child and explain to them what they’re doing wrong. This did NOT sit well with a bunch of my classmates and now that I am a parent myself, I find myself feeling guilty sometimes for even THINKING about popping Lariah even though she DEFINITELY deserves it sometimes.

So HOW do you reason with a child who is still learning to understand language and struggling to communicate? I don’t want to be a parent that is begging and pleading with my child to cooperate in exchange for the next best thing. While I make no judgments and take no issue with parents who do that, I would like to go another route for MY family.

The topic of this blog post was inspired by a particularly phenomenal temper tantrum that Squally threw last night. As I was putting her down, she jerked backwards and banged her head on my mouth. So now my top and bottom lips are both busted. Enough is enough and at some point, just putting her down isn’t getting the tantrum to subside fast enough. In case I didn’t already say that, that’s what I do: if she starts throwing a tantrum, I put her down and walk away and she can either get up and follow me or calm down and go about her business. While this is my preferred method of handling them, the tantrums are getting bigger and louder and I’m just curious to see what other people are doing to resolve tantrums that does NOT involve physically punishing their kids. One of my friends posted about her son throwing little tantrums on facebook the other day and she got some pretty awesome feedback, but I’d like to start a dialogue about this.

What do you do when your baby/toddler throws a temper tantrum? How do you handle it? 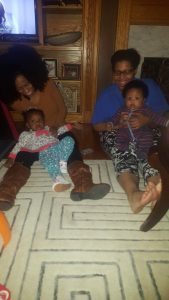 As we were trying to take pictures the other day, Squally was in the middle of a melt down. I’m sure you all can’t tell, but it was ridiculous. hah.

﻿Getting active and socializing!