Our first cloth diaper out and about poop excursion ?

So here’s what happened…?

We were SUPPOSED to be going to Kroger, but we can never seem to go exactly where we’re supposed to, especially with Auntie Lori with us. We’re like Dory and forget what we’re actually supposed to be doing and do everything else.  ? During this session of short term memory loss, we ended up at Guitar Center looking at recording equipment. This trip should’ve taken 10 minutes tops–30 minutes later, Sleeping Beauty Squally woke up from her nap in her stroller was ready to run and play. Cool. We love happy Squally. 5 minutes after she woke up, I smelled it: the poop of death!! ? I sniffed her butt to confirm and almost died. ? Without a shadow of a doubt, I SMELLED what the Rock was cooking!!

She was wearing a pocket diaper with only one insert in it. ( for those who don’t know, it’s a cloth diaper with an opening at the back to insert absorbent pads. The more you add, the more pee they’ll hold.) I only put one because I’m not trying to have her sitting in pee forever, we just need enough to catch a couple pee pees and then we change it. Still every 1.5-2 hours. Keep that baby Booty clean! Anyway, this poop was especially watery and following a nap, that diaper didn’t stand a chance!

I checked her outfit to see if she had leaked and she hadn’t! Thank God! Because I had left the diaper bag in the car and needed to go get it. I left her with Lori and when I came back..I was NOT surprised to see that her white stocking were soaking up brown POOP WATER ?. And guess who’s mom didn’t pack an extra outfit because… because I don’t even know. ?

I carried poopy butt Squally and pushed her stroller with the diaper bag and our jackets and what not to the bathroom where I could barely navigate the stroller in because I can’t drive strollers ?. Along the way, she leaked poop water into my shirt too. ? Luckily the bathroom had 3 save the day qualities: it was big, it had a changing station, and it was EMPTY!

I put the changing pad on the changing station and laid Lariah up there and of course she starts to fuss. ? I take off her shoes and clothes and she has literally poo juiced through every layer she was wearing.  ? I get to the diaper and of course there’s just as much solid poop as liquid (sorry for the TMI- but in case you’re really disgusted, I’m pretty sure I saw some grapes and oranges ?). So with cloth diapers, you’re supposed to scrape out the solid poop, rinse the diaper, and put it in a wet bag for safe keeping until you get home, but I have this super active 14 month old who is definitely not going to sit on the dang changing table long enough for ANY of that to happen. Not that I’d ever leave her on it unattended anyway. ?? Not trying to have her fall off. ? So I had to let my bare-footed, naked-booty, poopy-onesied baby run around on this PUBLIC BATHROOM FLOOR!! ? It gave me VERY little consolation that it LOOKED clean, but my sister was in the drum department talking about some drum I can’t even spell and we’re having a poop crisis alone in the bathroom!!

With Lariah happily walking around on the floor, I began to try to clean the diaper, but with WHAT? I had never cleaned a cloth diaper, let alone one with POOP in it, outside of my own bathroom at home; therefore, it hadn’t crossed my mind to put something in the diaper bag to assist me with that if it were to happen while we were out. ? So I grabbed some tissue and started trying to scrape the poop out with it and it just kept sticking to it. ? During my struggle to scrape over the toilet and not let my baby’s diaper touch the toilet, I accidentally let the poop diaper touch the roll of tissue. 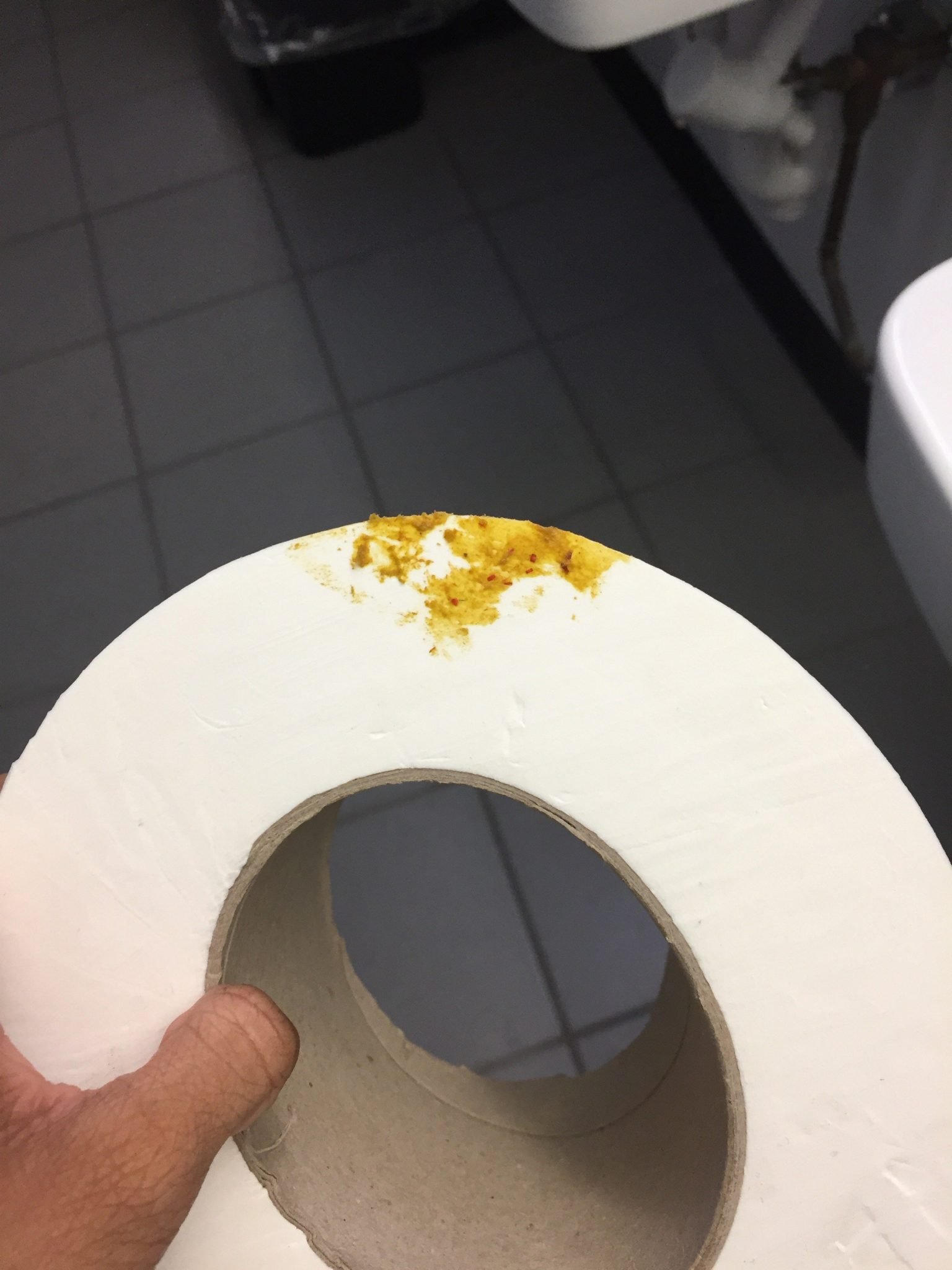 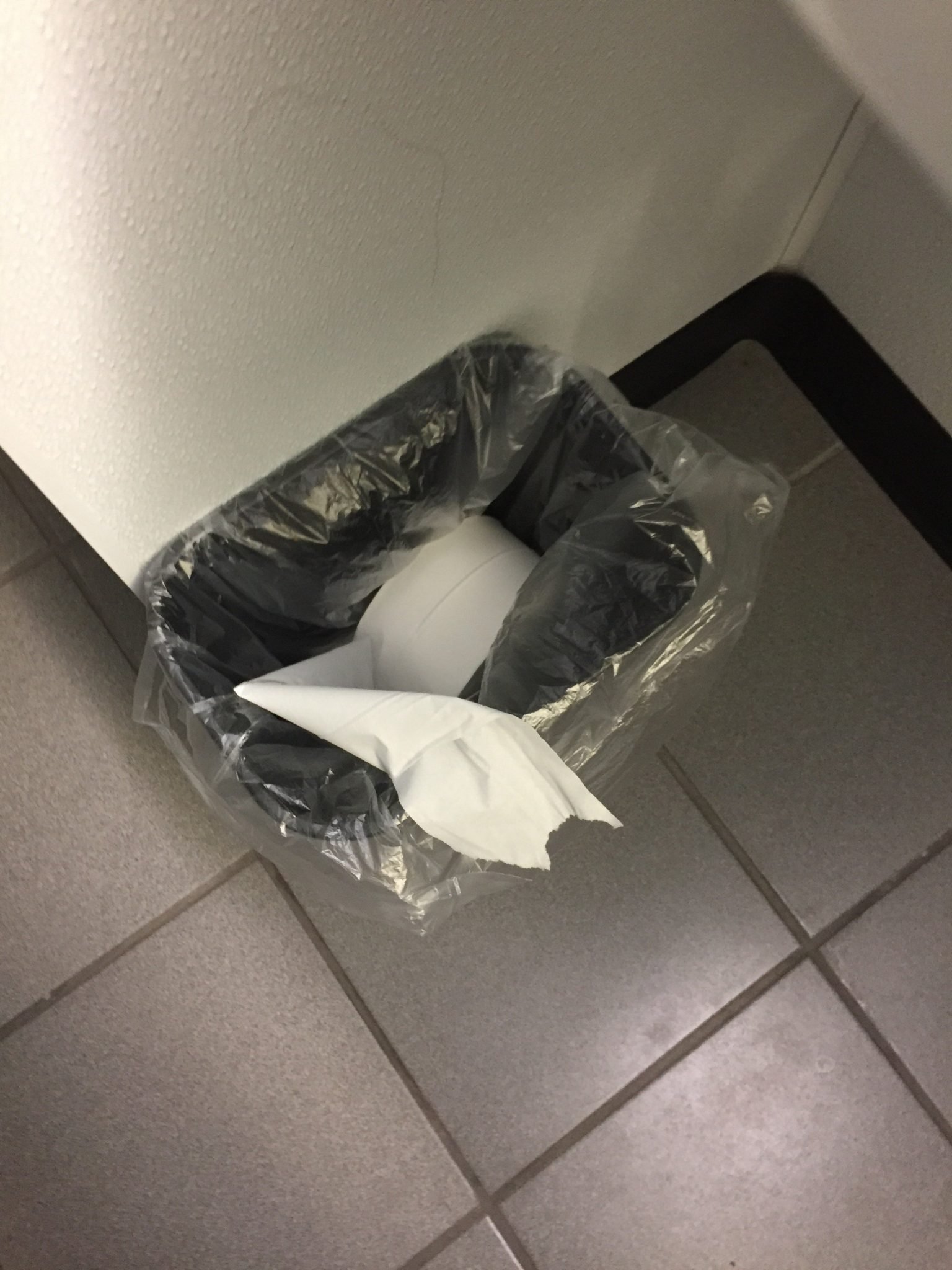 I threw it away!! I didn’t want anybody to wipe their butts with my baby’s POOP on their tissue!

So I turned to the sink to go ahead and rinse it out since the sink had a hot and cold faucet. They lied. ? The water got luke COLD at best. And of course…

The got dang sink did NOT WANT TO DRAIN!!

At this point, Lariah wants to be held and pulls out my earring, so I sat it on top of the tissue paper holder. I threw the soiled diaper in the wet bag that I DIDN’T forget, put on her new diaper, which I only packed one of, like an idiot, and began to blog dry her onsie with some paper towels. Luckily, she was wearing this outfit that day, so her butt and all of its glorious stains could NOT be seen.

FINALLY, I put the rest of her clothes back on and pushed that stroller out of that bathroom sooooo fast! Just to get back to my sister who says,”You’ve been gone a long time. Where have you been?! And where’s your other earring?” ???? I said,”Grab the baby and head for the door, I’ll be back.” So I went to get my earring and power walked my happy butt out of that store SO FAST!

Sooooo I learned many cloth diapering things during that trip:

1.Pack 3-4 diapers at ALL times. Regardless of where you’re going.

2. Pack 3-4 outfits, in case your baby does the impossible and poops out of a cloth diaper.

3. Invest in some sort of on the go poop scrapper (I’ll probably just pack some gloves).

And lastly, 4. Hire a public bathroom diaper changing assistant to follow you around to avoid this type of disaster again.

It’s okay to laugh at me now, because I’ve had a couple of days to let it sink in. For those who care, we’ve been out 3-4 times since then and have done much better, aka thank you Squally for not pooping in public. ??