It's a kind of magic. Parenting Solidarity.
Family Travels 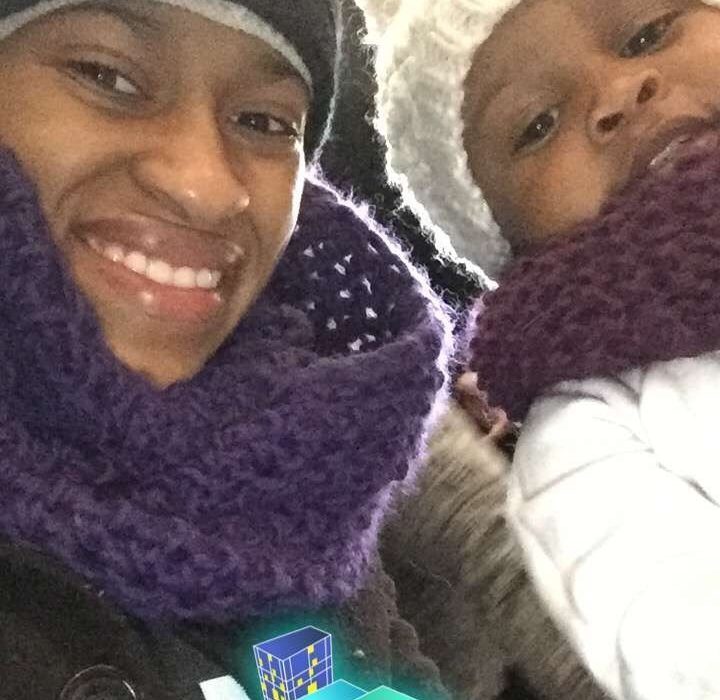 Hi y’all!
I chose to use the word y’all because apparently people in New York think my little “country” accent is super cute. Haha.

We had a GREAT time in New York City with the Squally Squad: Squally, myself ( her mommy), Squally’s papa, and Squally’s TT, but as I suspected before I ever planned the trip, New York is NOT for children, but ESPECIALLY babies!

As depicted on TV usually, it is a super fast paced place where everybody seems to always either be in a rush or just be accustomed to walking WAY faster than me or my 17 month old toddler. People squeeze through tiny spaces that don’t exist between people and getting bumped into is the norm and not the exception.
Now, I must admit, there was some bad planning on my part because St. Patrick’s Day had completely slipped my mind and I picked a REALLY nice hotel, the Room Mate Grace on 45th Street, but it was inconveniently located next to an Irish Pub which was POPPING all day on Friday! We could barely get in or out of our hotel due to lines waiting to get into the pub and people just congregating and talking on the sidewalk.
Our hotel was BEAUTIFUL! Designed by..someone famous, I don’t know, but it was very pretty and stylish. We had a room called the Executive King which gave Squally plenty of floor space to run and play! It also had an indoor pool that she GLADLY took advantage of.

There weren’t very many baby friendly places to go in the inner city. We went to the Disney store and she loved that, but it was crowded and there were people everywhere at all times. We also tried to M&M store and it was the same way. We let her walk when we could, but people were NOT happy about it because as most babies do, she walks slow compared to an adult. Also it was hard to keep people from bumping into her. She loved Macy’s and Old Navy, both of which were huge, spacious, and allowed her to have free roam with minimal obstruction. 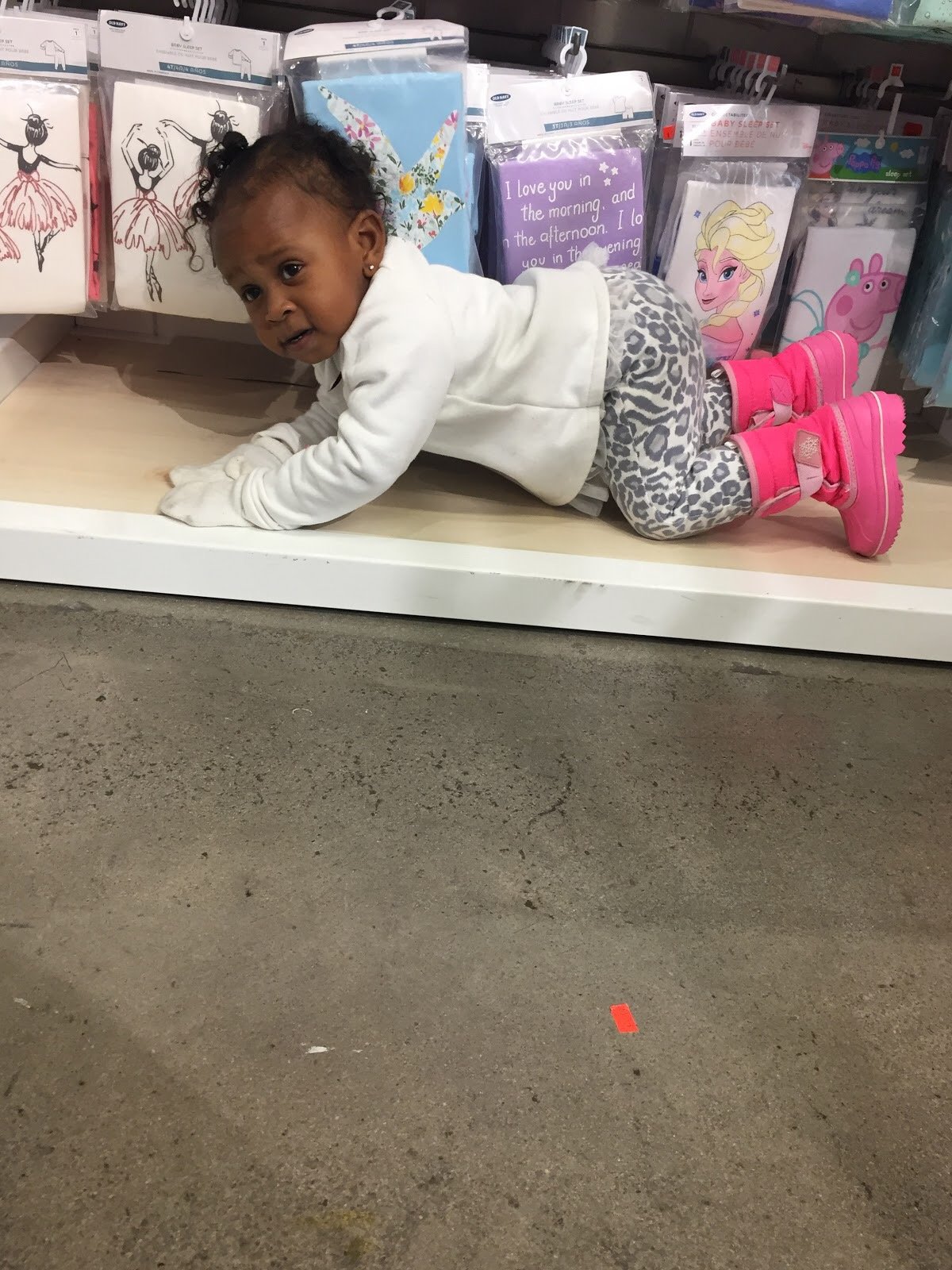 Most restaurants had seating areas multiple floors up with stairs in close proximity, aka NOT baby safe if we were to let her walk around, which we didn’t of course. The markets and stores in the inner city sold toys for children but no baby foods, like our beloved Plum Organics pouches, or toddler snacks etc. That ended up being okay for us because Lariah is a big girl and eats table food regularly, but it still irritated me. The people inside the various establishments that we visited were generally nice! Lots of people played with and talked to little Squally. 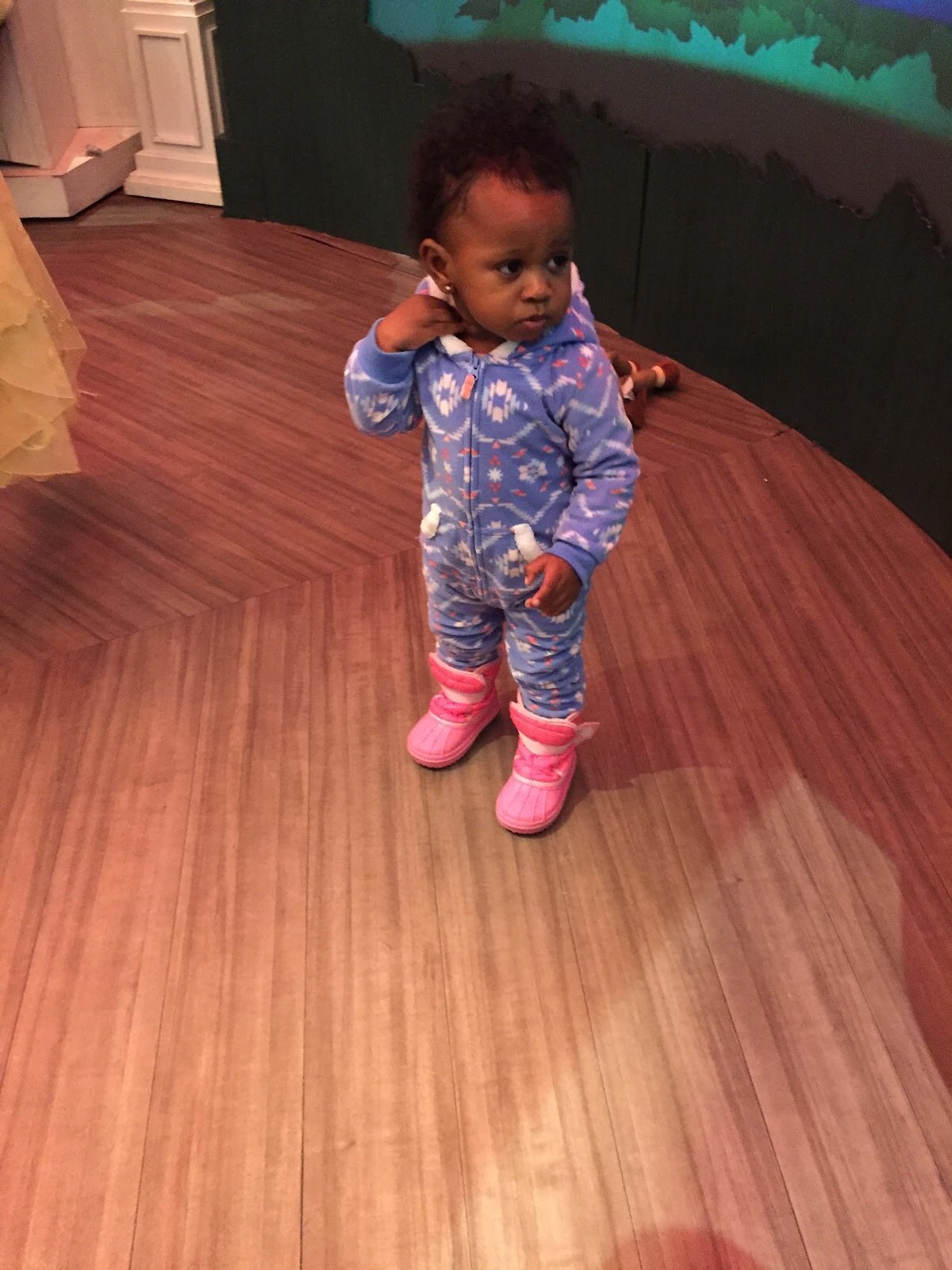 In the Disney Store

On the plus side, walking around for hours on end and being out made Lariah TIRED and this beauty who may or may not take a nap at all on a normal day took 2 on most days of this trip. So that was beautiful. Haha.

We loved the convenience of being able to order and have food delivered from all kinds of places. With the combination of cold and crowded, getting out more than once or twice was impossible for us because it took ALL of our energy! So it was nice to be able to stay in our hotel while still trying to New York native restaurants and food!

Overall, it was definitely a great trip! We enjoyed our frigid spring break and still got to break out the swim suits! We probably won’t be doing another trip to NYC until Lariah’s QUITE a bit older- old enough to walk herself and be interested enough in what’s going on to not getting irritated with all the walking that would be required of her!

I’m thinking our next trip will be to somewhere in Texas!

I’m very disappointed that I was unable to find anywhere in the city that sold CLOTH! But that is okay; because what I didn’t find in New York, I can still order online. 🙂

Air Travel with a toddler- traveling with carry-ons only!

Cross Country Move in the Midst of a Global Pandemic.