It's a kind of magic. Parenting Solidarity.
Parenting Tips

Infant feeding is one of my pet peeve topics for one million reasons: mainly because there are so many different opinions about it and its one of those subjects that people love to tiptoe around.. So I’m just going to rip the band-aid right now; if you’re offended by something I’m about to say, that’s cool. You’re entitled to your opinion just like I’m entitled to mine, but I like to think that the majority of my knowledge comes from pediatricians and my own personal research, so while it may hurt your feelings or the feelings of your loved ones, especially those of previous generations, it doesn’t make it any less factual or any less true. I’m more than open to having a conversation about any of it, honestly I welcome it!

Newborns only need milk. From birth until at LEAST 6 months old, your baby does not need ANYTHING other than milk. Don’t give baby milk from the refrigerated section in the grocery store. Its too harsh on their sensitive tummies and doesn’t meet their nutritional needs. Milk from a cow is for a cow, why we insist on feeding it to humans, I will never understand, but cow’s milk is too high in proteins, immunoglobulins, fat, lactose, calcium, phosphorous, sodium, and other stuff  for babies.  Breastmilk or formula.  Whether that be breastmilk or formula, that doesn’t really matter. We all know that I prefer breastmilk and advocate for it, but while formula isn’t my preference, science continues advance and consequently formulas that are more and more like breastmilk and that also tend to have some extra perks that breastmilk may not have if mom isn’t eating the right foods or taking the necessary supplements. By all means, fed is best, but do so wisely. Mix the formula according to the portions listed on the label. Too much water can kill a newborn. A baby shouldn’t have water until their one pretty much. You can give them an ounce or two here and there after 6 months if your pediatrician gave you the okay. NO water for baby. Feed your newborn every 2-3 hours. If you’re baby is sleeping, you don’t have to wake them up to feed them. Lot’s of nurses tell you to wake them up to feed them if its been more than 4-5 hours, especially when you’re still in the hospital. I think of this as a preference thing. I don’t prefer force feeding my baby. A newborn’s tummy is literally the tiniest thing ever. If they aren’t giving you hunger cues, I wouldn’t disturb my happily sleeping baby, but that’s up to you. I didn’t feel that way until after I had woken up my sleeping baby a couple of times per recommendation of my nurses and suffered the crying consequences. But like I said, that’s up to you.

(Newborn Squally nursing herself back to sleep)

It’s been my experience (from lurking in breastfeeding forums and mommy groups) that lots of pediatricians aren’t super supportive of breastfeeding moms on their journey at the first “sign” that baby isn’t gaining weight adequately. Breastfeeding is hard enough without having your child’s health professional not support you on your journey. Please know that you are supported and you are doing just fine! Pediatricians love to recommend supplementing to get your baby to gain weight faster. That’s cool, but I was 93 pounds before I got pregnant; so my child gaining weight slowly sounds logical to me considering her parentage. If your babying is still peeing and pooping multiple times a day, they are getting what they need! Could you supplement, yeah sure, but never be shamed into feeling like you HAVE to. Your milk is more than enough! Look up a chart of you’re the size of your baby’s tummy. Newborn tummies are tiny. I’d be more concerned if baby was eating too much as opposed to eating too little.

Here’s a pretty good chart to get you through the first month of baby’s life, usually past that you start to get a good idea of when your baby is getting full. When in doubt, call your pedi or the breastfeeding hotline. 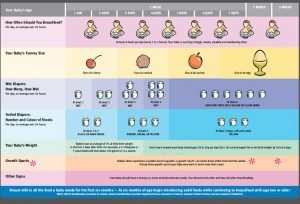 Lots of mommy’s start pumping super soon post-partum and give themselves a heart attack when they see how little milk they’re getting and there could be a million reasons as to why you’re not pumping much. Everybody’s breasts don’t respond the same to pumping. You could have the pump on too harsh of a setting, your flanges could be too big or too small, you could be pumping at a low production time, the reasons could go on and on. You don’t need a lactation tea or cookie to encourage your body to do what it needs to do. First, stop stressing, because stress can negatively affect your supply. Take a deep breath. Drink a bunch of water, maybe a Gatorade every now again, and trust your body to do what it was made to do. Does that work for everybody? Of course not, but more often than not, your mind is the problem and not your body. Trust yourself! You built this baby, you can feed it too!

For my formula moms, be careful not to overfeed baby; while a chunky baby is a happy baby, we don’t want to open a door for potential childhood obesity by feeding baby every time they cry. Check those diapers and try some soothing first. So often I see caretakers and parents immediately shove a bottle in baby’s mouth at the first sign of being discontent; yes, being hungry makes them cry, but crying is a late sign of discomfort! Baby gives several other signs before that, so don’t assume that you have to wait for baby to cry to start trouble shooting and don’t assume that food is always the issue. Your baby was used to being all warm and cuddly inside you. Sometimes they just want to be held and be near you. These times fly by, do enjoy those baby cuddles while you can!

Ugh, now, your baby does not need to taste or sample table food or baby food until 6 months of age unless otherwise specified by your pediatrician! Your pediatrician went through a lot of schooling to be able to tell you these things. There’s scientific data to support it. It’s not a load of crap. They aren’t making this up. Your baby will be more than okay, better off even, without sampling your food! Don’t be in a hurry to introduce baby to baby food or table food! Of course they’re interested in those, its new, but interest does not indicate necessity. Table food can be especially harsh on baby’s digestive system if introduced too early! NO, your two-month-old does not NEED to suck the salt off a French fry or soothe their gums on a chicken bone. Have babies in the past done that and survived? Yes, but that doesn’t make it any less potentially harmful. Just like putting cereal in the baby’s bottle.. DON’T DO THAT. Cereal in the bottle does NOT keep your baby full longer, it just makes their stomach hurt and confused, that’s why its taking them longer to eat. It doesn’t help them gain weight and above all, it’s a choking hazard! Giving babies any food before 6 months is a choking hazard. They still need to develop those muscles and they don’t need it anyway. Baby can’t miss what they’ve never had. Baby cereal is meant to be fed like cereal. It is not supposed to be fed from a bottle. Its supposed to be fed from a bowl with a spoon to babies at least 6 months old. Cereal is usually the first solid that pediatricians recommend introducing baby too. Mainly because the consistency is most like the liquid milk they are so used too, but also because its pretty bland and boring and unlikely to be rejected by a curious baby. I personally don’t see the nutritional value of cereal and we skipped it all together, but if you plan on feeding it to baby, let that be the first solid because if you try it after you’ve already tried fruits and veggies, baby is much less likely to eat it.

When baby IS 6 months and the doctor has given the okay to start solids, don’t go crazy! You want to start with solids that are purees of one food and you want to give only that flavor for at least 3 days to watch baby for allergic reactions as they may sometimes be delayed. Also, start with veggies first. Fruit are sweet and magically delicious, so naturally baby will be more likely to prefer those over the less sweet vegetables. To give baby his or her best chance at enjoying the vegetables that you are so often going to be feeding them, introduce them to veggies before showing them the joy that is fruit! Once baby has tried everything for the necessary trial period, its probably safe to try foods that are combinations and some meats too. We personally never got into the meaty singular baby foods; Muffin hated them, but hey, try those on the same trial schedule as the veggies and fruits, third in line of course. I like to think that the meats would pose a greater risk of a choking hazard, despite the fact that they are pureed, but I honestly don’t have very much experience with them, so I’ll keep my opinions to myself about that!

Once you’re at this point, next in line would be trying some of the baby snacks that melt in the baby’s mouth and eventually you’ll transition into food bits rather than just purees and baby feeding gets all types of fun! These are things that your pediatrician will give you their opinions and recommendations on as baby grows and matures. Soon here after, your baby will be transitioning into toddlerdom and then feeding becomes a whole different kind of nightmare! Check out my sister blog post for more info on that! 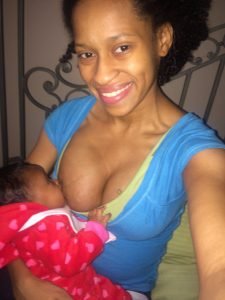