It's a kind of magic. Parenting Solidarity.
Lifestyle Parenting Tips 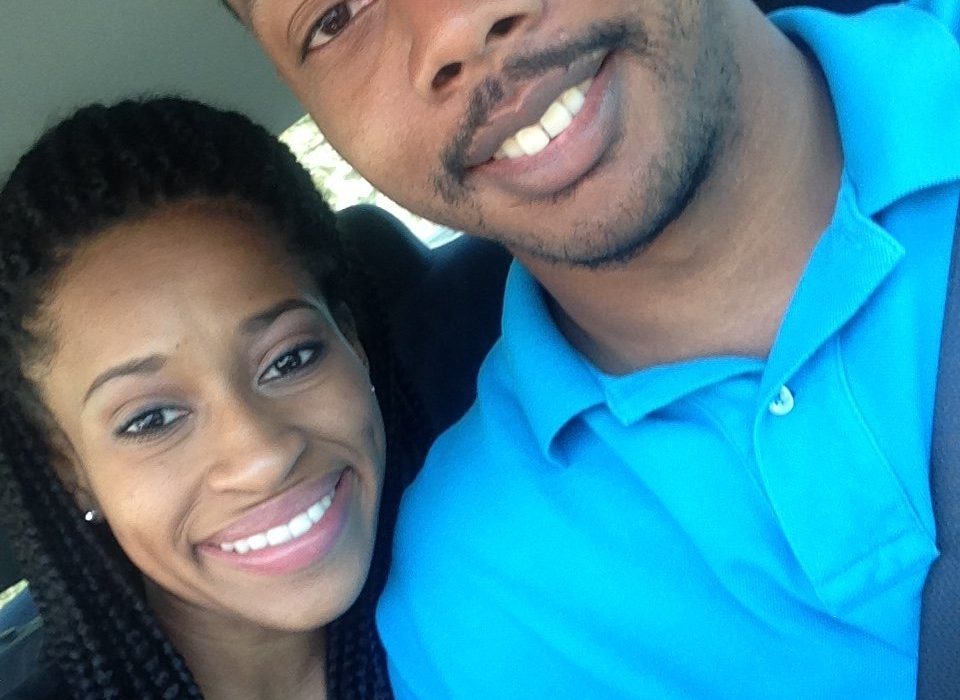 Due to some technical difficulties that I will affectionately call life, this post is a LITTLE late, but I hope it’s just as entertaining.

Short recap: when I left off last week, Brad and I had just met in Lebanon in the midst of an ice storm because we were so full of EMOTIONS about this surprise pregnancy! Mostly, good emotions, but also some mixed ones because we’re still humans who were dealing with repercussions of our actions that lead to an unexpected life change! Yes, we’re responsible adults, but I still think its okay to go through the motions a little bit!

At this point, there are a few people in the “know”; I needed to get my life together before I could allow myself to go public about my pregnancy! Future hubby was now informed, my sister, and maybe a handful of my other close friends at the time. (I say at the time because I’m not so close or at all conversational with some of them now.) Next, we needed to informed were the grandparents to be!

I am the youngest of 4 with my eldest brother being TWENTY years older than me. Wild right?! Yeah, so he had 2 kids that are the same age and my sister and myself; consequently my mom has been raising us and her grandchildren side by side. My youngest niece was about 9 at the time of all of this, and my mom was ready for another grandbaby. My sister isn’t having any kids, if you knew her, you’d understand why..she’s not exactly child friendly. Much improved since the birth of my daughter, but ridiculous nevertheless. So my mom was depending on me for a baby and despite my being on birth control, she regular accused me of being pregnant. Soooooooo all I had to do was get her to do that, which was hilariously easy. 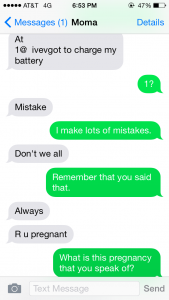 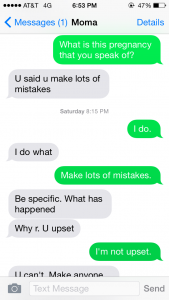 DONE! My mom knows! Check! We were waiting to tell my daddy because he wasn’t going to be quite as thrilled as my mom initially, so we just practiced our due diligence with him. Honestly, I don’t know if I ever ACTUALLY told him.. I think I just came home one day and was pregnant. Bam. There you go; in the know!

Informing Brad’s parents was a whole other deal entirely though… I knew them pretty well in my head. Matter of fact, I had actually met Brad’s dad before when he came to Knoxville to help Brad move into a different apartment, but we didn’t divulge the intricate details of our friendship to him at that time because it didn’t feel important. Haha. I’m sure his dad was suspicious, but whatever. As for his mom, I had heard her on the phone many-a-day and even responded to text messages on Brad’s behalf, but we had never spoken or met!

I’m about 6 weeks pregnant, I’m in Knoxville alone, I’m in the midst of my most difficult semester of undergrad yet, and the most stressful thing to me now BEYOND being pregnant is formally meeting the paternal grandparents of my growing squirmy wormy. Up until this point, they had been left in the dark about us, so now Brad had to not only tell them that we were dating, but that we were also successfully procreating!!! How awkward is that?!

To be honest, I don’t quite remember what or how he brought this up to them, but I do know that it took him a couple of days, maybe weeks, to figure out exactly what it was that he was going to say! I was left out of the initial exchange, because we didn’t feel like it was necessary for me to participate, but I think it was well received overall because immediately following, we were picking out a date to meet in person!! His parents live in Nashville, so Brad was coming from Memphis and I was coming from Knoxville. The plan was to go to church and have dinner. The date was set for April 12th! I was so anxious and nervous, but I had plenty of time to gather myself before it happened.

In the meantime, there were so many other arrangements to be made and so many strange, NEW things happening in my life that I was adjusting to. For example, pregnancy cravings just about ended my relationship on several occasions. Hahaha. While we were in Lebanon, we went to Applebee’s to eat and the waitress literally had to come back 5 times because I couldn’t decide what I wanted to order! I needed a sampler, but a personalized one. Not only did I want pretzels with ranch and buffalo wings, but I also wanted a steak well-done, French fries dipped in mashed potatoes WITHOUT chives and sour cream, a root beer, a sprite, mozzarella sticks, a chicken AND steak quesadilla, and some grilled shrimp too! I had 0 intention of eating all of that and I knew that. I was also aware of how insane I must have looked as I cried staring at the menu that day before finally ordering a 3-way sample of some sort, but that was not the end of me wanting small portions of everything I liked and not being able to do so because that was financial stupid.

Coincidentally, I was enrolled in reproduction and lactation during this trying time in my life, so while I was happy to be able to understand what was happening to my body, it didn’t make dealing with it any easier for me or anybody around me. IN MY HUMBLE OPINION, I wasn’t all that bad compared to some other pregnant women I’ve encountered or side-eyed while scrolling on social media.. shade But I suppose that THAT’S not my truth to speak…hahaha

Anyway, due to my enrollment in that class, it is my suspicion that my lack of overall morning sickness was due to my having already been exposed to the higher level of hormones required to sustain a pregnancy through my birth control. Don’t quote me on it, but that’s my story and I’m sticking to it. Haha. Nevertheless, there were random times that my head and my baby did NOT agree and I loss every one of those battles. My first OB in Knoxville wrote me a nausea relief prescription to help with it, but the occurrences were so inconsistent, it didn’t feel worth the trouble to me! I can’t even count how many times I wasted money on Chick-Fil-A breakfast because the greasy, delicious hash browns and orange juice did not want to be friends inside of my belly. It was SO annoying, but clearly not enough of a deterrent to stop me from trying.

These random bouts of “morning sickness”, as they call it, never seemed to happen when I was at home, chilling, or not having a care in the world. Nor did they ever seem to be restricted to the morning!! No! It was always when I was at one of my many jobs or in class. ESPECIALLY…yep, you guessed it, reproduction and lactation!!! I like to think that my squirmy wormy had an ironic sense of humor and enjoyed making me experience what I was learning about first hand to reinforce the material! With that being said, you would think that I would’ve made an A in that class, but I think I got a C. In my defense, I didn’t study at all for my final because I was sick and tired of being sick and tired. Plus, I had already been accepted into the veterinary school of choice and could careless what my GPA was because I no longer needed it! ( I graduated with a 3.47 for those who are curious. )

Prior to ( and post, of course) pregnancy, I was a scholar; thusly I sat in the front of the classroom. Upon finding out I was pregnant, it didn’t occur to me how problematic that would be.. Especially with the combination of the unpredictable morning sickness, my complete noncompliance for “providing myself ample time to find parking”, and my exponentially increasing “I just don’t care” attitude.

Student, faculty, and staff had to pay for a parking pass at UTK. It was not included in tuition and having one is nonnegotiable because UT Parking loves giving out parking tickets like Jesus giving out fish and bread! As a commuting student, or someone who didn’t live on campus, the parking pass was ~$200 a school year, BUT having this parking pass did NOT guarantee you parking. Why? Because UT does not cap how many parking passes they sell and they keep increasing their class sizes, but not increasing their parking lots!! Instead of offering an actual, REAL solution, UT likes to send out passive aggressive emails advising us to allow ourselves 30 minutes for parking to avoid being late for class. Butttttt the answer was no. I was pulling in the parking lot 2 – 5 minutes before class started! Faithfully. Period. I was taking 16 credit hours, president of a club, working on campus, at a vet clinic, and at Petco, trying to maintain a long-distance relationship, making everything attempt to keep it all together, and growing a tiny human! NOBODY had time to devote 30 minutes to TRYING, not guaranteeing you’ll be successful, but TRYING to find a parking spot!! I. Wasn’t. Doing. It.

So even if I did manage to find a parking spot before class started, my new problem was randomly feeling the need to vomit while sitting 10 feet away from my teacher. I kept my cool and quickly excused myself from the lecture hall, but it didn’t stop my teacher’s from asking questions! Now I must make the decision of whether or not I tell my teacher’s what’s really going on in my life! Part of me wanted to be truthful, but the other part of me was still struggling with feelings of shame and guilt for not only having an unplanned pregnancy, but the disappointment that would surely follow from my teachers who had such high hopes for me as one of the few undergrad students to be accepted into the veterinary school a year early! Unfortunately, the random morning sickness evolved into other normal pregnancy symptoms like being super tired and hungry all the time. So whether I liked it or not, my teachers were taking notice to my behavioral changes. From randomly walking out of class during a lecture, to shamelessly eating full meals while they were teaching, there was definitely something amiss and they wanted to know why! Not to mention that I also needed these same teachers to help me get my ducks in a row for the academic changes that would soon follow when I did announce my pregnancy! I didn’t know what steps I needed to take to get my affairs in order; so I decided to talk to my academic counselor whom I liked a lot!

Things immediately got real after my meeting with my counselor. I never explicitly placed my finger on HOW word got out.. but it DID get out. And it spread fast!!!

BUT if you want to find out about the drama that follows… TUNE IN NEXT WEEK!!

the TRUTH about breastfeeding: some insight into why everyone isn’t doing it!

Take a Look! Science Really is Everywhere with Hero Elementary on PBS KIDS