It's a kind of magic. Parenting Solidarity.
Holidays & Special Events 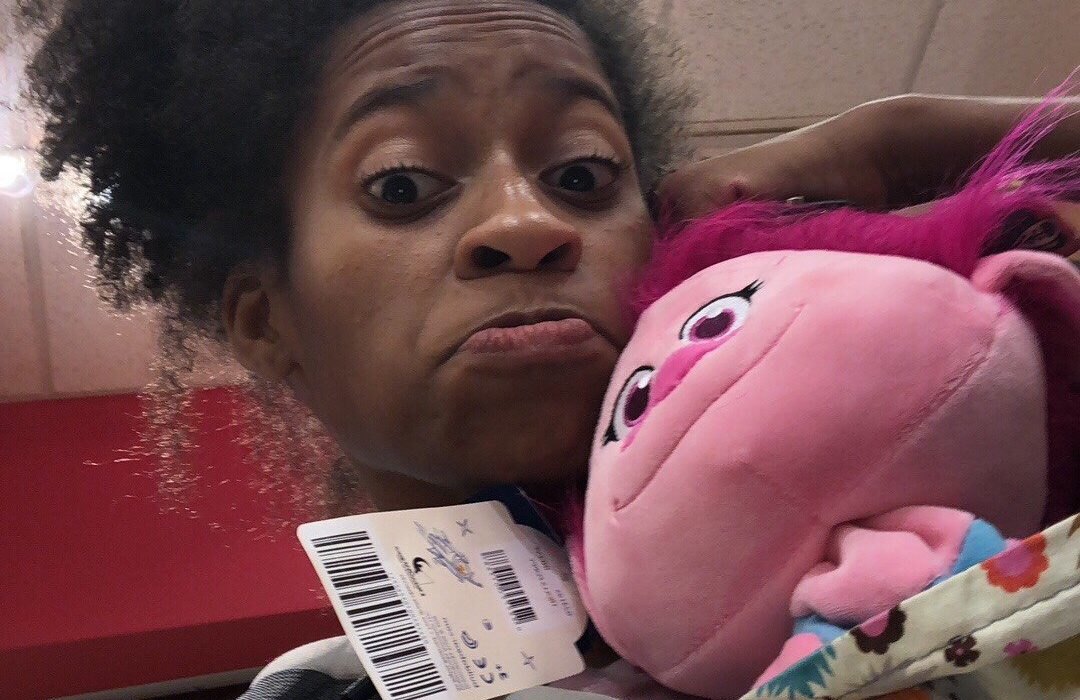 I’m not sure whose idea it was to host this event, but I bet they will never live it down following all of the chaos that this event caused! I appreciate the thought, honestly I benefited from the event, but not without spending half my life waiting in a never-ending line to do so!

My friend texted me around 9pm Wednesday night asking if I was planning on participating in the event. Little did she know that I was still driving back to Knoxville from Memphis! I didn’t get home until about 11am, but we agreed that I’d pick her up and we’d take our kids to make some build-a-bear’s because WHY NOT? As you all know, I only have Muffin, but my friend has twin toddler boys and a 2 month old, so we all were not going to fit in my tiny Chevy Cruze! So I drove to her house and we all got in their sweet minivan that I love so much. 🙂

We stopped and got sonic on the way there because we got a late start on the day (slackers) and got to the mall around 11:30am! I believe that the mall “opened” at 10am, but apparently people had been camping out since like 5am, to our surprise! So when we walked in the West Town Mall, the line was coming from the store and around this entrance and KEPT GOING! We walked to the end of the line and I was winded!! So I decided to record a video for Facebook, because people needed to see this ridiculousness!

We made it to the back of the line around 11:40AM and once we got settled, I checked my email and saw that build-a-bear was closing it lines! Luckily, we were already there and the West Town Mall hadn’t decided to follow suit just yet, so we showed up just in time. It wasn’t until an hour or so later that mall security started turning new arrivals away. 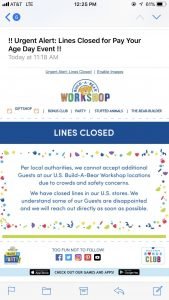 We started the day with one double stroller and a lillebaby carrier to manage 3 kids, but we quickly realized that we would need more, so Kenzie went back out to the van to get the single stroller too. Of course Lariah waited until she left to decide to want to nurse, so imagine me trying to push a double stroller with 2 33lbs toddlers in it while carrying and breastfeeding a 27lb one. That’s about my same weight; so the struggle was real. Luckily, the sweet grandma on vacation behind me pushed the stroller for me whenever the line did move until my mom-assistant got back. The twins stayed in their stroller for the most part and Muffin ran around like the hooligan she is, but it was fine because the mall was full of children-hooligans, so I was totally cool with it. As the wait got longer though, more mommies and daddies began losing their patience and ended up leaving, which was great for us because we got to move up in line, but still minimally helpful other than the peace from parents yelling at their kids for being kids.

Around 1:30pm, my husband decided he was hungry and came to visit us at the mall. We immediately sent him to the play area with the toddlers because they deserved some freedom, but we should’ve known better than to send him to the play area alone with 3 2-year olds. It didn’t take more than 5 minutes for him to call me for help because Lariah was running away trying to come find me. So I got out of the line to go get her and these 2 ladies had just picked her up because she was running around barefoot and alone screaming, “Daddy! Come on! Daddy!” I was lazily speed walking toward them waving my arms frantically because I refused to run since I had already laid eyes on her. SO I gathered her and the twins up and headed back to the line. After another attempt at letting the kids play at a different play area, Brad resorted to just pushing them around the mall in the stroller.

Daddy didn’t get to stay very long because he had to go pick up my sister from work, so he left and we continued to stand in line. Right around the time he was leaving, a Build-A-Bear employee came around with $15 off a furry friend coupons for people who didn’t want to stay in line. Lots of people took the coupons and left. Some people took the coupons and stayed. We just said, “no, Thank you.” $15 off is great, but $2 for Princess Poppy is BETTER! So we weren’t leaving! Plus, we just would have been hanging out with our kids at home all day anyway, so this felt like time better spent. At this time, they also told us that the wait would be another 5-6 hours, from around 2pm.  While that sounded unreal, we later found out that the actual wait time was much worse! 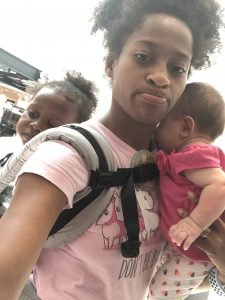 We got to know a lot of new people from standing in line forever because there was nothing else to do other than talk! Around 4pm, Brian, Kenzie’s hubby showed up because he had just gotten off of work! Brad didn’t make it back until close to 6pm. He made sure to bring back one of our Tulas! Mind you, we’ve still been standing in line ALL OF THIS TIME. 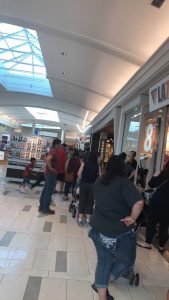 By 7pm, we were about 3 stores away from Build-A-Bear. The Build-A-Bear Team had just come around again with those coupons and informed us that one of the stuffing machines was now out of commission and that the wait time until we got in the store would be 3 hours if we stayed and stuffed our animals or 2 hours if we picked them out and left. They also read off a list of what stuffed animals were still available: 2 types of My Little Pony, some Pokemon, lots of kitties, tigers, and bears, plenty of Star Wars, and little else. I was discouraged because I wanted Princess Poppy for Squally Muffin, but we had made it this far, so we weren’t leaving empty handed.  Still determined to have this experience, we continued to wait it out!

Between the strollers, baby carriers, and 4 adults, we made it work! It wasn’t until almost 9pm that we began to see the light at the end of the tunnel and actually made it into the store!

At this point, all of us parents are sitting on anything we can find: store window panes, strollers, children, and dirty floors were ALL fair game! When we finally got to the entrance, we had an awkward stare off with one of the employees who was in charge of writing our kids ages on their stickers and letting us pick out our animals. We were so close and still SO FAR AWAY!

FINALLY, we got to pick out our animals and guess who was still in stock? PRINCESS POPPY! I was so happy that I could’ve cried, but my body was too tired to even produce the tears. hahaha. We thought that getting in the store was an accomplishment, but if you weren’t buying your animals unstuffed, the wait wasn’t over! And the poor kids who picked out Pokemon and wanted to leave couldn’t because apparently its against Build-A-Bear policy to let Pokemon leave without being stuffed. Luckily, none of our littles picked out Pokemon, although I wouldn’t if they had, because we were staying regardless!

My phone is on like 2% at this point and all of my friends are messaging me to see if I was still there, but at the risk of my phone dying, I was selectively responding. So I did selectively choose to take a celebratory selfie for getting Princess Poppy! 🙂

The kids were tired of standing in line, so the daddy’s took them outside of the store to play. The mall is closed now anyway, so running the halls was totally fair game. When we finally made it to the stuffing machine, all 3 toddlers were inside of the store, but only 1 twin was interested in actually stuffing the toys. While taking to the employee, we found out that she had been awake since 5am and at work since 8am and was supposed to get off a long time ago (its well after 10pm now). Despite it all, she was so happy and sweet and genuine! It was refreshing to be talking to someone who was cranky like us. haha. We were very nice to her though and she appreciated that because some other parents weren’t. She also expressed to us how grateful she was to be working in Knoxville because we were one of the few locations that didn’t get closed for the day due to fighting and “unsafe” waiting conditions. I thought that was CRAZY that parents were apparently shoving and fighting each other to get these Build-A-Bears! #CrayCray

We checked out around 11:15pm and between all of us, we got 7 stuffed animals for $11 dollars! It was awesome! And our kids were well behaved up until we sent them out to the van with the daddies to get ready to go while we paid for our goodies! Then we did finally have a a couple of meltdowns from everybody, but considering we had been gone since 10am that morning, I think that was pretty fair!

I saw so many memes and jokes all over social media about how people refused to wait in that line or they’d rather pay full price for the stuff: GOOD FOR YOU! 11 hours and $4 later, my daughter has 2 new buddies; so commence the jealously 😉 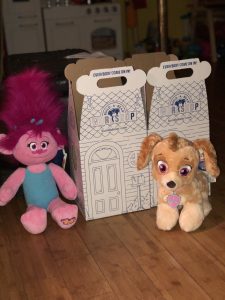 Celebrating the Holidays With Friends: Creating a New Normal.

Celebrate! It’s Black Breastfeeding Week: Here’s Why You Need To Know About It!